Nobel Lecture by Mother Teresa | Summary of the Story 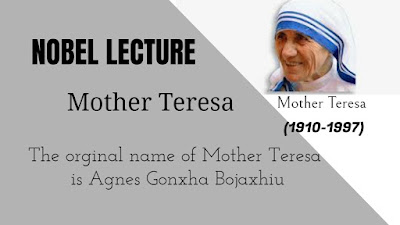 1. Mother Teresa began her nobel lecture with the prayer of St. Francis of ASSiSI :

While giving her lecture for accepting the Nobel Peace Prize, Mother Teresa requested all the honourable members present in the assembly to thank God, and to take part in the prayer of St. Francis of Assisi. She thought, that prayer is still important today as it was in the past.

2. Mother Teresa suggested to them that they should thank God for the gift of peace:

Mother Teresa reminded us that God loved the world very much and wished us to live in peace. So, God sent his son Jesus to the world to give peace to all, especially the poor. At present, peace is something that is valuable to all of us. For that, she wanted all to thank God for that gift of peace.

3. Mother Teresa reminded all the need of Jesus’ love to save the world from severe miseries:

While addressing the audience present, Mother Teresa referred to the Gospel, especially the fourth gospel authored by St. John to indicate that Jesus appeared in the world with the good news of peace for all of us. He became man to love us, but he got hurt loving us and died on the cross while showing us that greater love. What is important for us is the realisation that love has to hurt. She insisted that we should have strong desire for God as we havé been created in his image. We should show love to others, and desire to be loved too. God is hungry for our love, and to satisfy that hunger, we should find out why there are large number of people left destitute not
only in Calcutta streets, but also in many streets all over the world.

4. Mother Teresa had an unpleasant experience at a home:

Once Mother Teresa had an opportunity to visit an old home. Reaching there, she found that old parents were looking towards the door, though they had everything. They did not have smile on their faces. She got much shocked, for she was accustomed to see smile even on the dying persons faces. She came to know from the attending sister that everyday they were expecting either a son or a daughter would visit them. Truly speaking, they lost the love of their children, and were left neglected and unwanted.

5. Teresa’s sympathy for the neglected children and her strong protest against abortion:

Mother Teresa was in constant pain to see the young boys and girls in the West getting addicted to drugs. It is because they are left neglected by their parents. That neglect breaks peace, and more than that what destroys peace greatly is abortion. Abortion is a direct killing of life by a mother who is supposed to show love and affection to her child. That killing reminded Teresa of the Scripture where God says, He will never forget his child even if a mother could forget her child. By killing a child, we deny God who really loves us all. She appealed to all not to destroy a child, but to make sure the birth of every single child. For that, she took some measures. She intimated all the clinics, hospitals and police stations that they would take all the unwanted children and make proper arrangements for them. They got amazing response from all, especially from unwedded mothers. To them, it is the blessing of God because the childless parents continued to demand children from them. In addition to that, they are teaching the poor and the helpless natural family planning.

Mother Teresa had been successful in teaching the lesson of natural family planning among the beggars and street-dwellers. As a result, her organisation could save the birth of 61,273 babies in Calcutta in six years.

7. The great thinking of the poor people :

Mother Teresa thought that poor people can be great teachers. One day one of the poor told Teresa that family planning is nothing but self-control out of love for each other. Another dying street-dweller thanked Teresa before her death for serving her.

8. Mother Teresa was extremely surprised to receive the grateful love of the helpless man before death:

The man, whom Mother Teresa picked up from the drain in half-eaten condition by the worms, said that he was going to die like an angel. He demanded nothing for the cure of his pain. He died smiling. Teresa was really surprised to see that sort of greatness in his person. What really concerned Teresa is that we failed to show our love to Jesus.

9. Mother Teresa appealed to all for bringing world-peace :

Mother Teresa reminded all that her associates have been serving God day and night. She advised each family to pray to God together likewise. If each family loves one another, the feeling of togetherness will then grow and thus world-peace may possibly be achieved.

10. One should first show love to one’s kith and kin:

If we want to root out sufferings of the world, we may do it by loving people. By loving and serving people, we will be able to achieve the affinity with God. And we should begin it from our home.

11. A little Hindu boy of four years old wanted to share his love:

Once Mother Teresa had to face great difficulty in getting sugar for her home. Surprisingly, a little Hindu boy of four years old collected the sugar allotted to him for three days at home, and donated it to Teresa’s home. He knew how to share love.

12. Mother felt at home having been presented herself at the assembly:

Mother Teresa received a lot of love from the audience present at the assembly. She had been so pleased that it seemed to her that she was in Calcutta with her own sisters.

13. Mother Teresa had an extraordinary experience:

One day a gentleman came to Mother Teresa and reported that a Hindu family having eight children had not eaten anything for so long. He requested Teresa to do something. She hurried there with some rice, and when the children saw the rice, their eyes were shining. But the mother of the children took the rice from Teresa, divided it and went out. Teresa could not understand what happened. When the lady returned, Teresa enquired about it. The lady answered plainly that a muslim family was hungry also. She went to give them a share. That incident made Teresa really surprised. The strange thing was that, though the family had nothing to eat, they knew how to share love.

14. Teresa would try to build homes for the homeless with the prize money :

Mother Teresa would like to thank God for having the opportunity to know the people present in the prize-giving ceremony. She informed them that their sisters had been working all over the world. They were all pleased for that prize of peace. She would like to let all know that she would try to make homes for the homeless with the prize money.

15. Teresa relived the passion of Christ once more:

Teresa noticed widespread human sufferings in the present day world. People were suffering not only from hunger, but also from being thrown out from society. It was really painful. The incident of detachment was seen more in Western countries. So, she felt the passion of Christ being relived once more. For that, she addressed her sisters to make their lives prayerful with Christ.

16. Teresa would prefer the giving which one would give being hurt:

Teresa wanted the audience to pray to God for their team working around the world. She wanted them to pray in such a way so that they can serve God in the poor. At the same time she appealed to them to help her not from their abundance. She asked for the giving until it hurts them.

17. Teresa advised us to share our love with others:

Teresa mentioned how a man suffering from serious disease, shared his love with others. That man did not smoke for a week, though smoking was his only companion. He donated that amount to Teresa for helping the hungry. She bought bread and gave those to the hungry people. Thus, both the giver and the receiver became happy. That is the gift of God. She advised us to enjoy that spontaneous and undivided love. Jesus is in our hearts and in the poor whom we meet. If we want to enjoy the pleasure of loving Jesus, we should share our love and smile with others.

18. Teresa’s appeal to smile at each other and to publicize God’s love widely throughout the world :

Fourteen professors from the USA came to visit Mother ‘s home for the dying in Kolkata. They were absolutely amazed when they saw the activities of Teresa with their own eyes. They asked Mother for an advice to follow. Teresa advised them to smile at each other. She thanked the Norwegian people for awarding her the Nobel Peace Prize. She appealed to them to become a burning light in the world of peace. She inspired them to publicise God’s love throughout the world as God loves us all. She finally reminded us all to love God for living a beautiful life.