Leela’s Friend by Rasipuram Krishnaswami Narayan: Summary of The Story 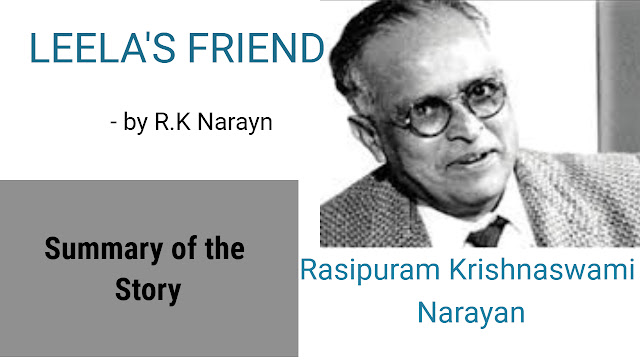 Mr. Sivasanker was thinking deeply about the servant problem standing in the front veranda of his house. At that time Sidda appeared at the gate himself and asked if Mr. Sivasanker would require a servant. He called Sidda in. Mr. Sivasanker inquired into his background and came to know that he had been in a doctor’s house.

Mr. Sivasanker called his wife. Leela, their five-year old daughter, came out. She was very happy to see Sidda. She liked him. Finally Sidda was appointed as a servant, of course at the choice of Leela. Apart from doing all household works, he was to look after Leela too.

Leela loved Sidda’s company much. Sidda had to run to her when Leela called him to play with her in the front garden. When Leela told him to throw the ball into the sky, he did it. When the ball came down, Sidda attracted her attention by saying that it had touched the moon. He told Leela to examine a bit of the moon attaching to the ball. Leela believed it innocently.

Gradually Sidda began to behave with Leela in a kind way. He told Leela that he could touch the moon from coconut tree. Sidda informed her that he had a good relation with the moon. He took Leela near the rose plant and to the backyard. He showed her the moon in both the places to prove that he had the power to make the moon follow them.

5. Day by day Leela began to be closer to Sidda:

In the evening, Leela liked to play at teaching Sidda with the little knowledge she had achieved. He was asked to squat on the floor in front of a catalogue. Then he was asked to copy what Leela wrote and drew in the pages of her catalogue. Sidda failed to copy Leela. He had to find out excuses to have relief from Leela’s control over him. When Leela went to bed after dinner, Sidda made her sleep telling imaginary stories. In this way Sidda became Leela’s close friend.

6. Leela’s gold chain was lost and Sidda had disappeared:

One evening Sidda went out to buy sugar. Leela followed him too. After their return, Leela’s mother found that Leela’s gold chain was missing. Leela’s mother rebuked her, slapped her face and asked Sidda about it. Sidda denied having it. When Leela’s mother mentioned the police Sidda disappeared from their house in that night.

7. Leela takes Sidda’s side, not her mother’s:

Mr. Sivasanker returned home, heard everything and went to the police station to lodge a complaint against Sidda. Leela did not want to go to bed after her meal was over. She wanted Sidda to tell her stories. Her mother tried to console her. She was worried because Sidda might come at night to loot. But Leela’s opinion was completely different. She said that Sidda had left their house because they behaved very badly with him.

8. The police arrested Sidda and took him to Mr. Sivasanker’s house:

Mr. Sivasanker came to know from the police inspector that Sidda was a branded criminal. The inspector gave him words that they would arrest him soon. After four days, the police really arrested Sidda and took him to Mr. Sivasanker’s house. Leela was pleased to see Sidda again.

9. Sidda denied that he had taken the chain :

As a matter of fact, everybody except Leela supposed Sidda to be a thief. When Leela’s parents charged Sidda with taking the gold chain, he denied having it. The inspector said that he would not pnunish him if he returned the chain. But Sidda went on denying and Leela went on supporting Sidda’s statement too.

10. Leela was upset when Sidda was taken away to the police station:

Sidda was firm on his standpoint, though the police pressed him to confess. At last they decided to take Sidda to the police station. Leela tried her best to oppose them, but she could not. She was very upset. At the police station, Sidda did not make a confession at all even after a few days as reported by Mr. Sivasanker to his wife.

11. Finally Leela’s gold chain was found in the kitchen:

After a few days, Leela’s mother picked up chain from the tamarind pot in the kitchen. It was coated with tamarind. She washed it and found that it was Leela’s gold chain. Mr. Sivasanker came to know about it. He said that he would go to the police station to inform the inspector but would not keep Sidda in his house.