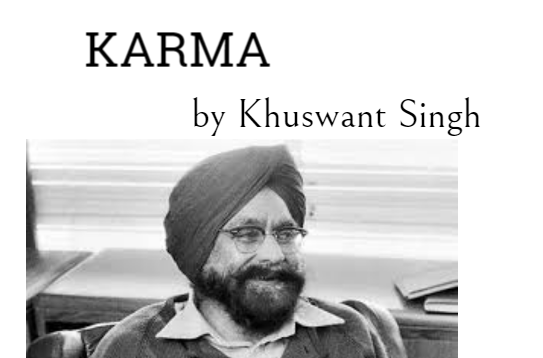 Here is a summary of the story ”KARMA” by Khushwant Singh taken from the textbook of class – XI, WBCHSE Board.

3. Lady Lal moved to the ladies compartment and had her tiffin:
Though Sir Mohan was well dressed, Lady Lal was wearing a dirty white sari with a red border. She called a railway coolie and asked him to take her trunk towards the ladies compartment. She filled her betel leaf case from a hawker’s stall. At a certain place she opened her tiffin carrier to have her tiffin. During tiffin, the coolie sat on his haunches opposite her.

4. Lady Lal’s observation about her husband:
Lady Lal informed the coolie that her husband was a vizier and a barrister. He was in constant contact with officers and Englishmen. She thought herself unsuitable to him. He was very busy and had no time to spare for her. He disliked his wife’s poor and illiterate relatives. He met his wife sometimes at night, though for a few minutes. That visit bore no fruit.

6. Mrs. Lal got into the ladies compartment, but Sir Mohan remained calm:
The zenana compartment stopped exactly where Mrs. Lal had stood on the platform. The compartment was almost empty. She got in, made two betel leaves, put them into her mouth, and gazed idly at the jostling crowd. On the other hand, Sir Mohan showed no sign of business. He did not like the bustle of the common people. It was to hima show of bad breeding. He was
well-bred, and had been abroad five years. He considered himself like a cultured Englishman. Even the English people admitted that Sir Mohan talked like an Englishman. He continued to sip his scotch.

7. Sir Mohan’s extreme love for English fashion and manners than his own country:
Sir Mohan was calm and quiet in all his activities. He considered his countryman as vulgar, and for that he did not prefer Indian way of life. It was a matter of surprise that he did not even like his wife for being exceedingly fat and having no knowledge of social manners. He spent five years in England and considered that life as glorious. During his stay in England, he developed closeness with Oxford College and teachers, Balliol tie, boat races, ruggers, English cigarettes, bags and gowns, dinners at the inns of court, and so on. Truly speaking, Sir Mohan chose English way of life as a whole, and expressed it in his gestures.

10. The soldiers flung Sir Mohan out of the train:
The soldiers came where Sir Mohan was. They informed him that the coupe was reserved for the army. They demanded forcefully that Sir Mohan should leave the coupe. Sir Mohan protested in Oxford accent. But the soldiers abused him. They threw his luggage out of the coupe when the train began to move. When the arrogant Mohan tried to oppose, he was thrown out of the running train. He rolled backwards on the platform, and fell finally on the suitcase which had been flung instantly before. The soldiers left bidding Sir Mohan goodbye.