Jimmy Valentine by O Henry: Summary of the Story 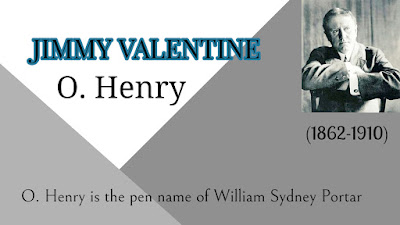 1. Jimmy was called to the warden’s office and informed that he would be released next morning :

Jimmy Valentine was stitching in the prison shoe shop, when a guard came and led him to the warden’s office. The warden handed him the pardon from the governor and informed him that he would be released next morning. He advised him to stop cracking safes and live straight. Jimmy pretended innocence and claimed that he had never cracked a safe or committed the bank robbery that had sent him to prison. The warden put in his mind of his involvement in Springfield burglary. But he claimed that he was innocent.

2. Next day Jimmy came out of prison and went to Mike Dolan’s place to get back his safe cracking tools:

Next morning Jimmy came out of prison and took a train to another town where he met Mike Dolan, a friend and accomplice at his bar, Taking his key from Mike, he went to his room above the bar, where he had lived before Detective Ben Price arrested him. From the wall of his room he pulled out his dusty old suitcase containing the safecracking tools. After a few minutes he came down from his room. He was now dressed in a handsome, well-fitting suit and was walking with his cleaned, dusted suitcase. When asked about his plan, he informed Mike that he was now the sales manager of a biscuit company and was out on his day’s work. Mike was pleased to see his ingeniousness.

3. A week later three safe burglaries were reported to the police :

A week after the release of Jimmy from prison, three safe burglaries were reported to the police. The burglaries took place in Richmond, Logansport and Jefferson cities respectively. No chue was left in any of the cases, except that they were done in the same manner. The authority of the administration geared themselves up. Ben Price’s service was demanded again. Ben Price concluded that all these robberies had been committed by Jimmy. He spread out his net to catch him again.

4. Meanwhile Jimmy arrived at a remote town, fell in love with the daughter or the town bank owner and became an new man:

In the meantime Jimmy arrived at a small, remote town called Elmore. On his way to the hotel he met a beautiful young lady in front of the town bank. They looked at each other, and in an instant Jimmy underwent a complete change. Enquiring about the lady Jimmy learnt that she was Miss Annabel Adams, the bank owner’s daughter. The love that grew at first sight urged Jimmy to give up the career of safe cracking and live an honest life. He decided to settle in Elmore and start a new profession- shoe business. He adopted a new name, Ralph D. Spencer and booked a room in the hotel.

5, On the day Jimmy wrote a letter to a friend expressing his desire to hand over his tools to him, Ben Price came to Elmore to hunt him out:

The business of Ralph D. Spencer flourished quickly, and Ralph soon became a social success. Gradually he had developed friendship with many, including Miss Annabel Adams. At the end of a year he and Annabel were engaged to be married. Mr Adams, the banker, also accepted Ralph as his would-be son-in-law. To shever completely the link with his past, Jimmy wrote a letter to an old friend in St. Louis expressing his desire to give him his set of tools, as he no longer needed them. On the very day he wrote the letter, Ben Price, the Detective came to Elmore and spotted Jimmy in his shoe store.

6. Next morning on his way to Little Rock, Jimmy went to the bank, where a child accidentally got locked inside a brand-new vault:

Next morning Jimmy had his breakfast at the Adamses. That day he was to go to Little Rock to order his wedding suit and buy something nice for his would-be wife. Atter breakfast, the family party of Mr Adams went to Spencer’s hotel. Spencer took his suitcase from there. Then they went inside the Elmore bank because Mr Adams wanted all the members of his family to have a good look at the brand-new vault installed by him. Mr Adams happily explained its workings to everybody including Mr Spencer. While they were thus busy, Ben Price arrived at the bank. The little girls in the family of Mr Adams found the vault specially interesting. While playing with the door handle, a girl accidentally got locked inside the vault. The door could not be opened as the lock and the combination had not yet been set. They were all stricken with terror, for the child was screaming inside.

7. At the request of Annabel, Jimmy broke open the vault with his tools and freed the child:

Suddenly Annabel pulled at the sleeve of her lover, Ralph and entreated him to do something. At the request of Annabel, Jimmy Valentine re-appeared in place of Ralph D. Spencer with a strange smile on his face. Then taking the risk of revealing his tainted past, he did a daring act for the sake of love. He applied his specialized tools and broke open the vault within a short time, freeing the frightened child.

8. When Jimmy was about to leave the bank, Ben Price stood in his way. But strangely enough he pretended that he had not recognised him and let him go:

Jimmy packed up his tools and walked to the front door. At that time, he heard a faraway voice calling his name. It appeared to be the voice of Ben Price. At the door he saw Ben Price standing in his way. Finding no way of escape, Jimmy surrendered. He told the Detective, “Well, let’s go.” But Ben reacted rather strangely. He denied recognizing him and let him go.