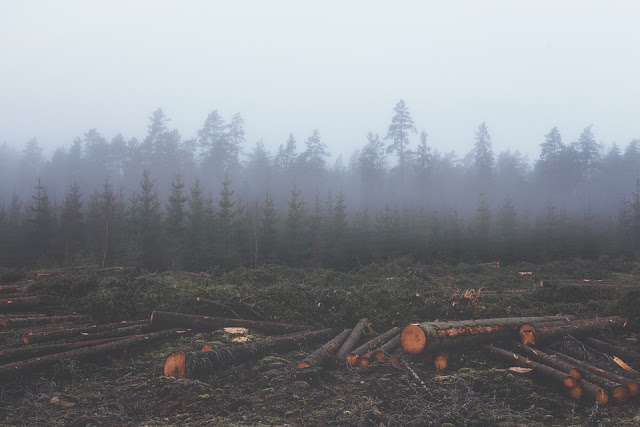 Deforestation, one of the major cures of modern society is always threatening our existence. The sheer hunt for wealth and complete indifference to environmental backlash is responsible for deforestation across the globe. Dishonest businessman cut the trees to sell them at night at a high price, sometimes throwing dust to the forest rangers and sometimes entering into an unholy deal with the local goons, political leaders and administration.

Deforestation and forest degradation are both a cause and a result of climate change Plants absorb carbon dioxide and use it to grow, but when they decay or burn, carbon dioxide is released again. Decaying plants also produce methane, a greenhouse gas more potent than carbon dioxide.

So deforestation and forest degradation are doubly damaging because of greenhouse gases are released (e.g. through forest fires, or using the cut trees as firewood), while at the same time the number of carbon dioxide absorbing trees is reduced. Thirty percent of the carbon dioxide added to the atmosphere over the past 150 years is thought to come from deforestation, but this is a small amount compared to what is still stored in forests. The Canadian and Russian boreal forests alone hold 40 percent of the world’s carbon stocks Changes in temperature ranges and precipitation can harm forests. Drought and forest fires are expected to increase due to climate change. Forest fires can be a normal part of forests they clear dense bush and are part of some species’ lifecycle. However, forests over stressed by human activity and drought can also be devastated by them. There are already indications that the Amazon is drying out, which could lead to dangerous feedback of fires and desertification.

Invasive insect species may also damage forest health. Insects play a role in boreal ecolo8 they decompose litter, supply food for birds and small animals, and eliminate diseased rees. But insect attacks are likely to increase in frequency and intensity as established forests SuCCumb to the physiological stress associated with warmer, drier conditions. As the Arctic warms, some invasive insect species, which the colder climate normally helps hold in check, are already increasing in population.

Sustainable forestry practices do not cause a net increase in carbon dioxide in the atmosphere because a new tree is grown for every one cut down. By contrast, clear-cutting and converting forestland into urban areas has a very high negative impact because of the to rest is destroyed and replaced with heat-absorbing pavement and buildings. Obviously, re-forestation, development logging and protecting ancient forests are essential we do not want the pace of climate change to increase further.